Are you exhausted by your own mind?

Is your day-to-day life up and down?

One good day followed by a bad one?

Chances are you’re like 99% of the population who was never taught how to generate positive, constructive thoughts for themselves and about themselves.

Even worse, you’re probably restricted by a whole assortment of limiting beliefs.

It’s a thought you keep thinking over and over again.

Is either that bad?

No, but they add up.

And so do yours.

The effect of these negative beliefs is a narrow frame through which we view possibilities for ourselves.

If I believe I have a bad memory, how often do you think I will try to use that memory in my everyday life?

And I’ll be worse off for it.

How about if I had the belief, “I’m just bad with women”?

What kind of effort would you expect me to put into meeting someone?

So, what can we do about this?

First, we identify the negative thought or belief.  Journaling is super helpful for this.

Next, we dispute it and counter it.

“Bullshit!  I may not have been great with women in the past but that doesn’t mean I can’t be better with a little help and some practice”.

Finally, and this is the most important part, you dissociate yourself from the voice spewing the negative belief.

If you believe your inner critic is the real you, it will rule you.

But if you can create a separate persona for it – one that is different from the true you – it loses its power.

And you’ll be considerably more successful at quieting it.

This can be a real game-changer AND you can have fun with it.

Give your inner critic a silly name and goofy attributes. Make it cartoonish and mock it for its rigidity and negativity.

My critic’s name is Hildy.  She’s a witch – you know, the cartoonish one with a green face, a crooked nose with a wart on it and that tall, black, cone-shaped hat.

She’s my critic and I goof on her every time she tries to restrict me.

And start to separate yourself from the grip she’s had on you.

“I Know What I’m Looking For”Uncategorized 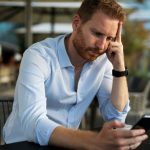